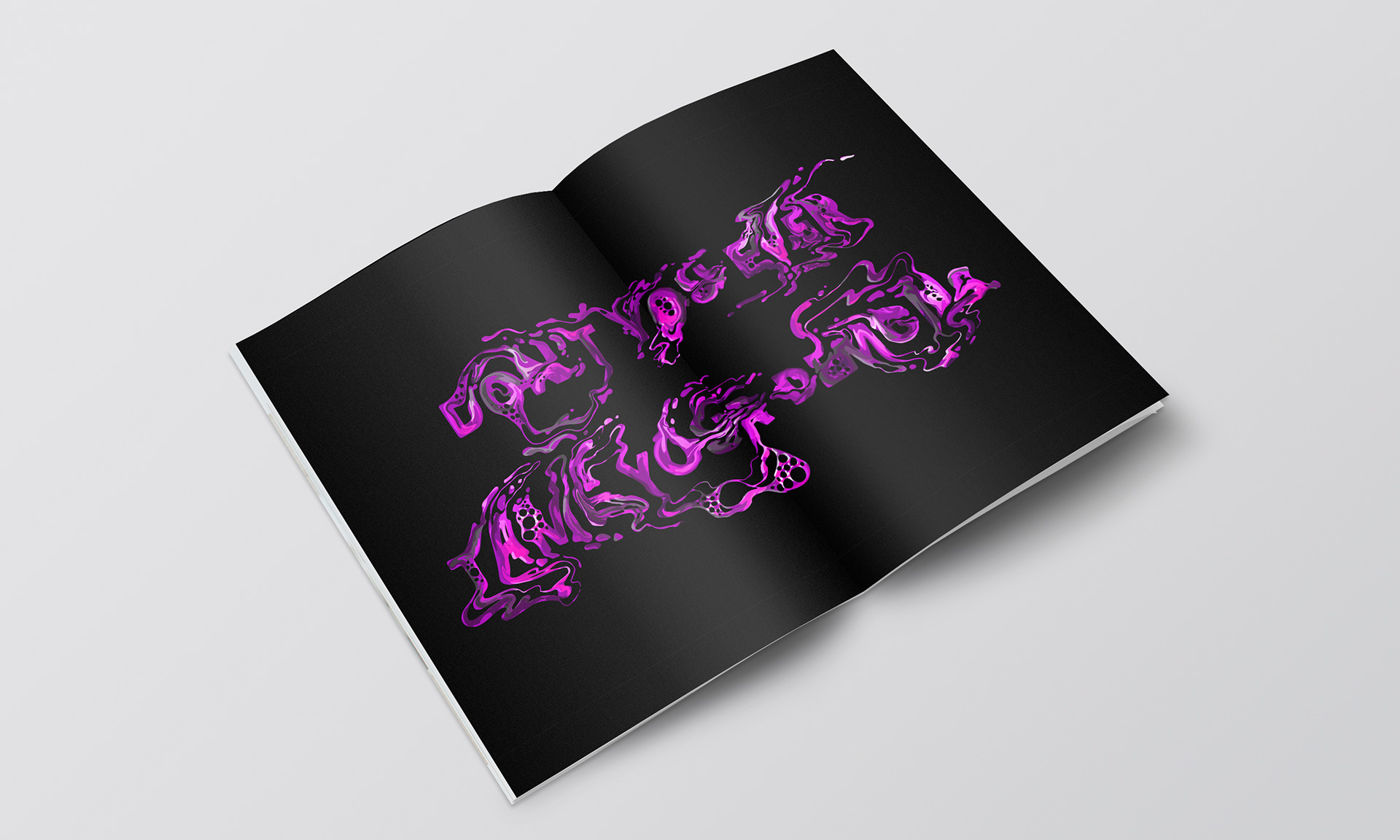 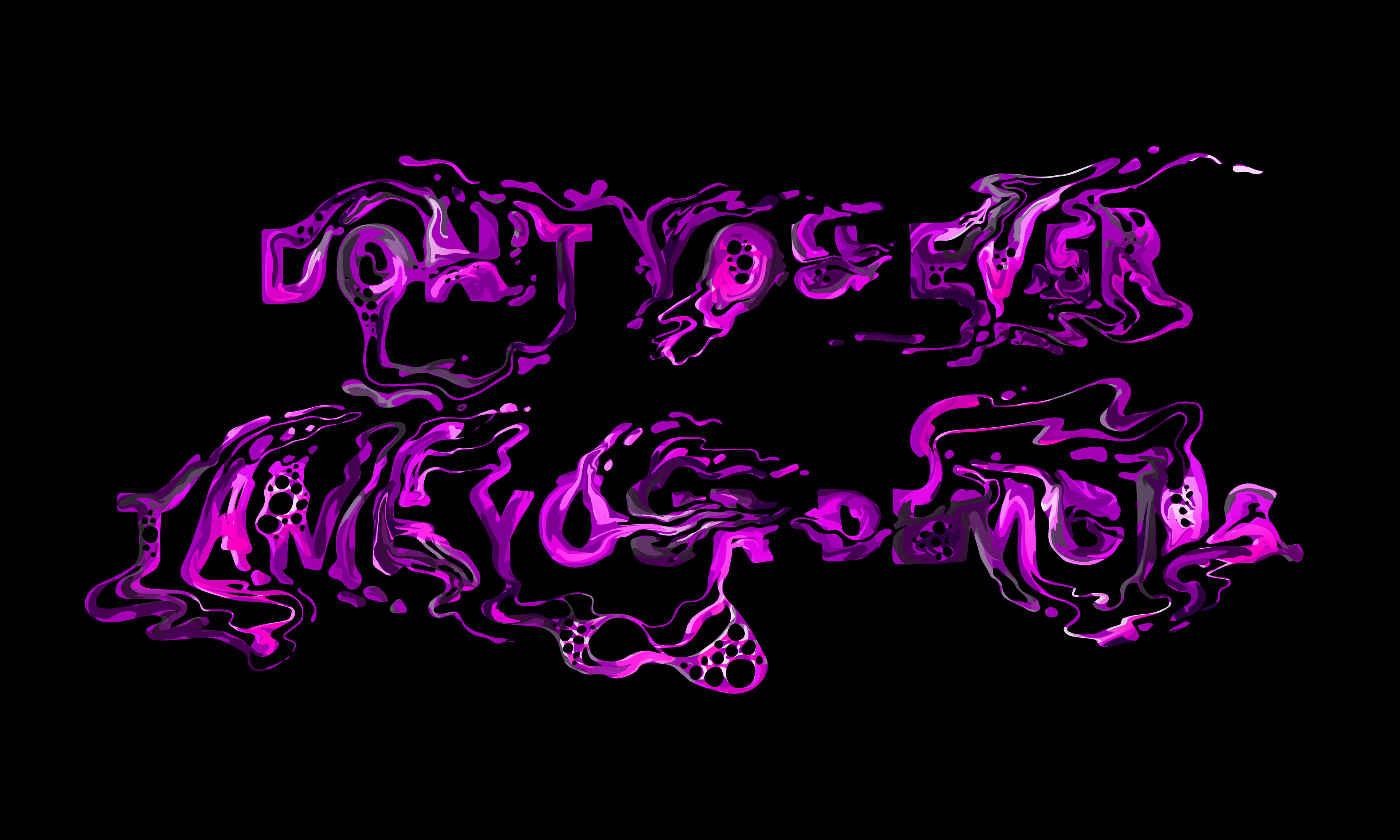 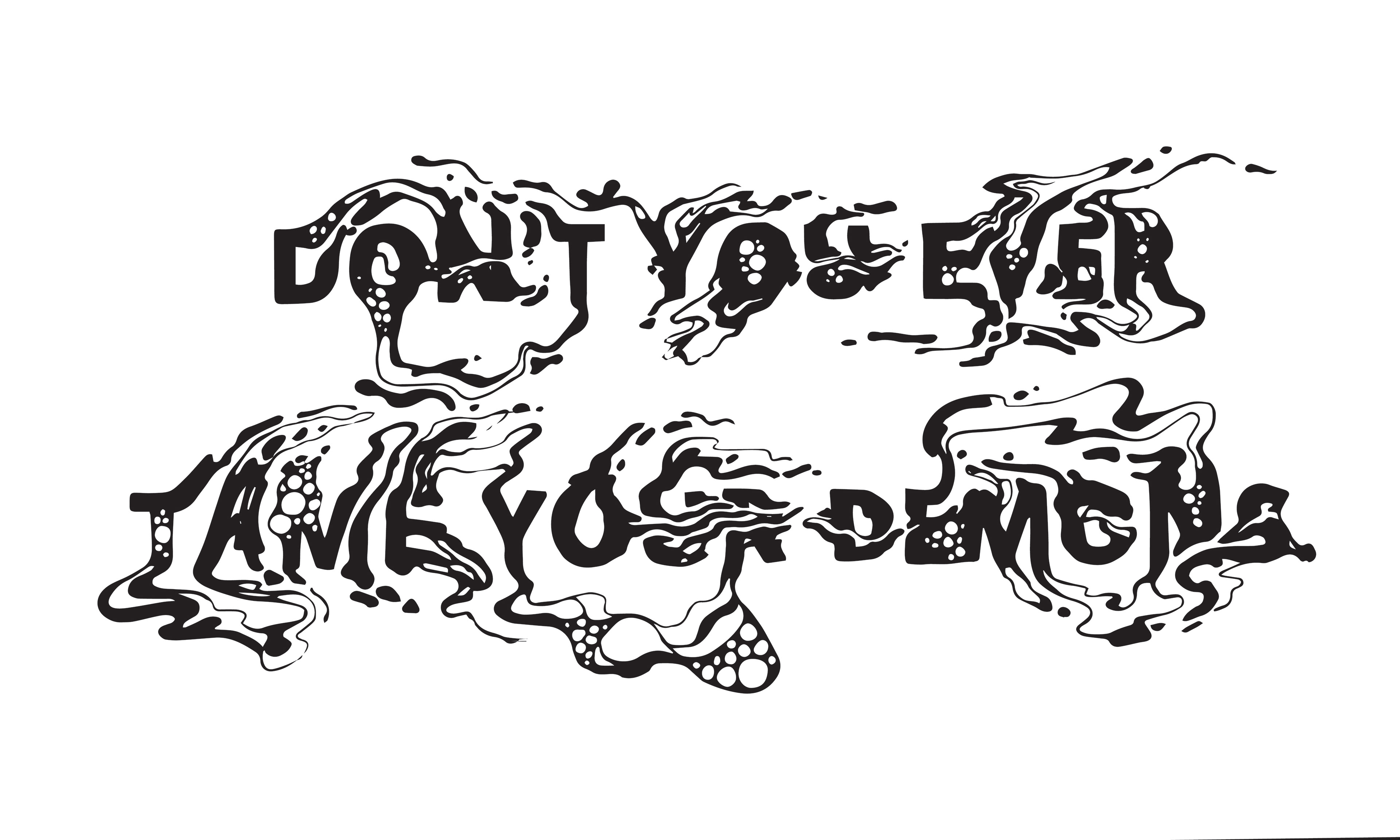 In this project, a poem was chosen from any form such as a traditional ballad, sonnet, or new poetry such as slams, spoken word, or even a popular music lyric. My focus was on music lyrics. The lyrics were interpreted focusing on the creative manipulation and voice of typography. The words were explored to create a reflective representation of the theme/mood of the lyric by crafting the typography in an expressive manner.
DIMENSIONS
20" x 12"
TYPE
Typography
Print Media
TOOLS
Adobe Illustrator
Adobe Photoshop
This spread plays on the dark tone of the song "Arsonist's Lullaby," by Hozier, drawing particular inspiration from the words “tame" and “tame.” The letterforms are shaped to appear liquid, sticky, and unpleasant. The black background adds to the darkness of the spread, and the purple and grey typography adds to the spiritual effect. The letters are stretched and moving, to imply that they are not “tamed," like the demons within the letter are trying to escape. With this typography I pushed the boundary to what was legible, as some people could read the lyrics, and some people could not. I believe the illegibility adds to the ominous tone of the song.
Here are some explorations I sketched before I decided on what lyric and design I was continuing with: 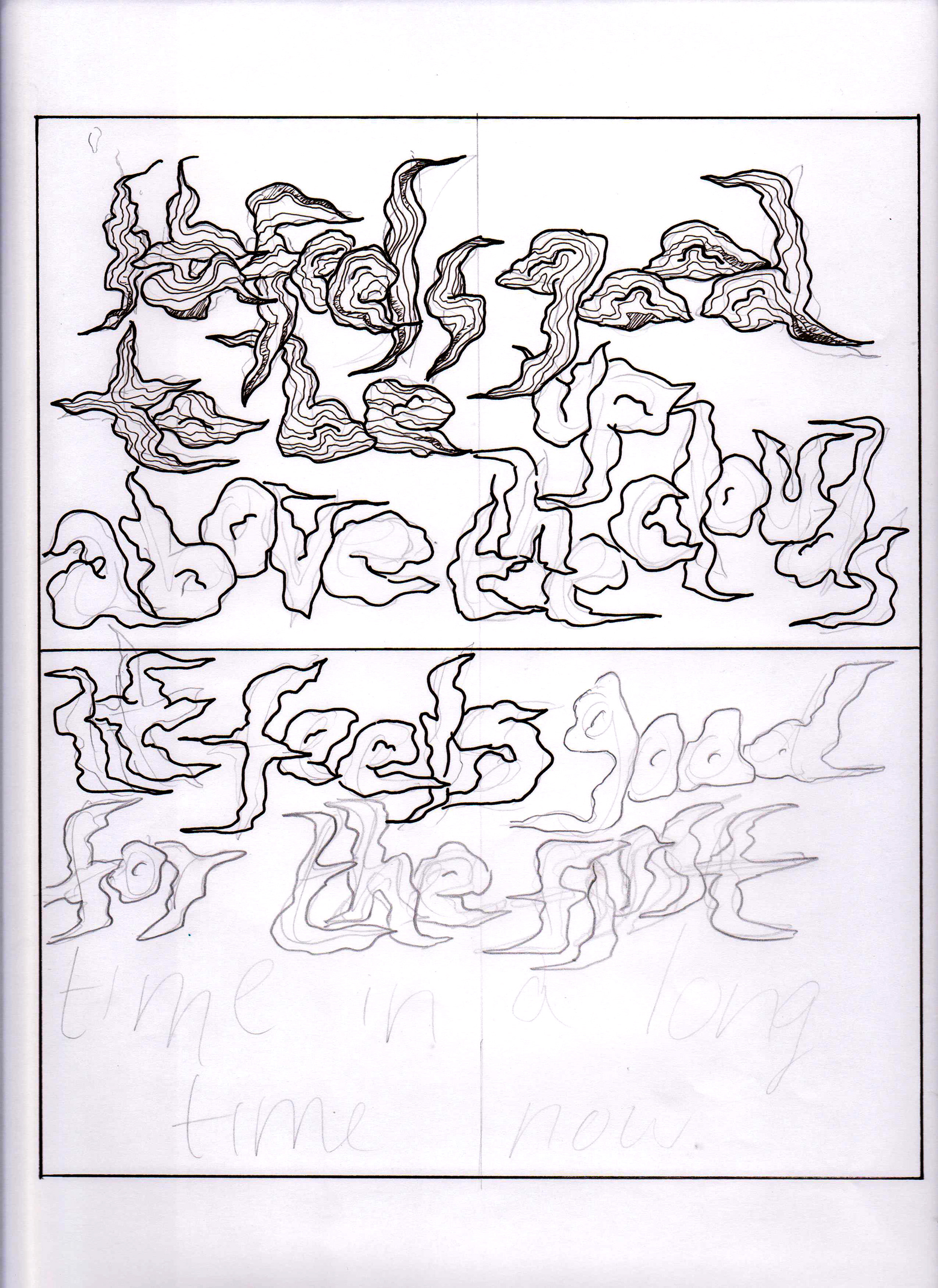 It feels good to be up above the clouds. It feels good for the first time in a long time now. In these spreads I was playing on the word “clouds” from the lyrics. I attempted to give the letters an ethereal, smoky feel. However, I did not feel that it was very successful and attempted a different approach in my next sketches. 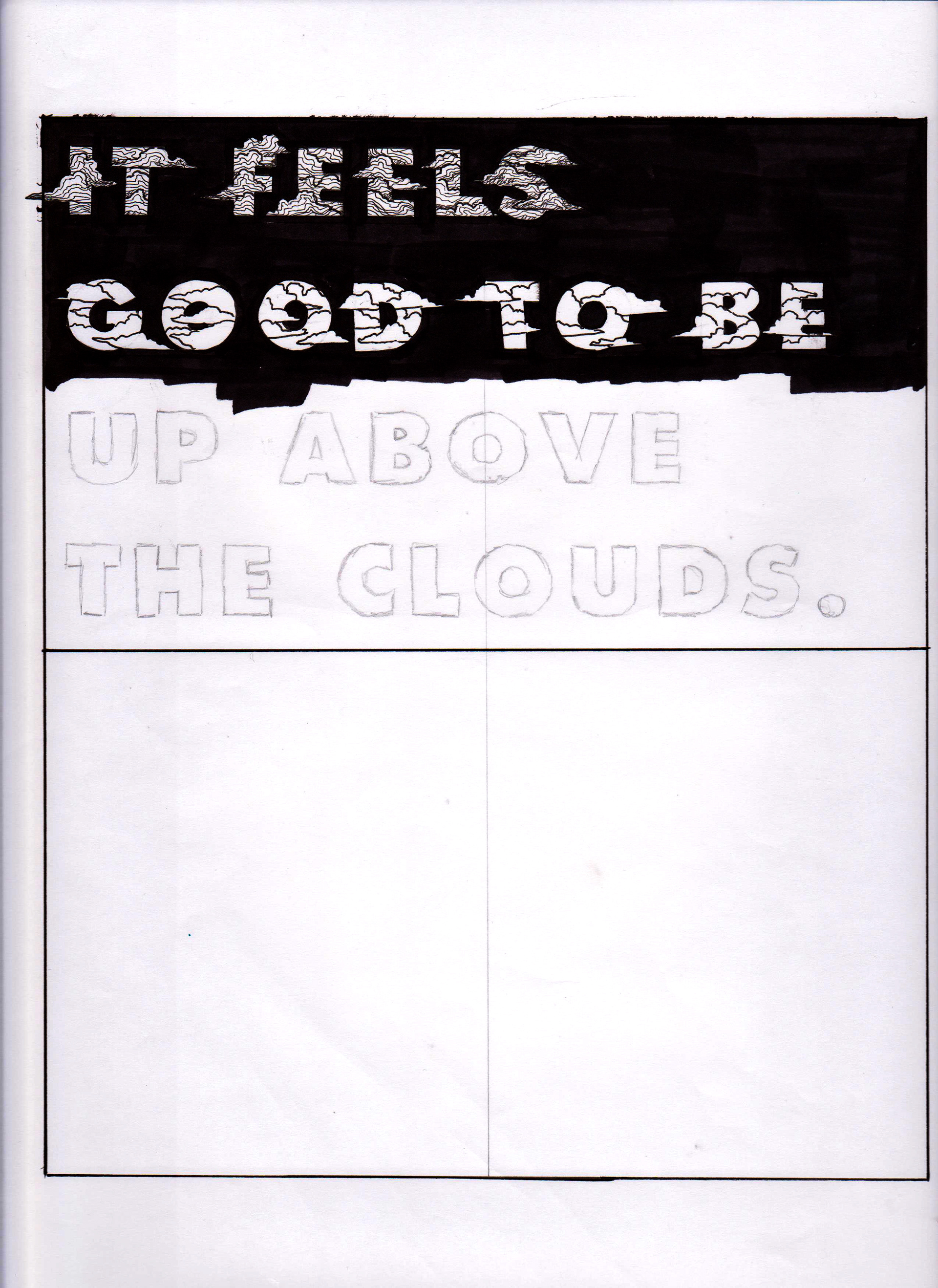 Here I kept my letterforms less abstract and gave the clouds a more traditional appearance. I liked the appearance of this first spread but I did not think it was quite expressive enough. 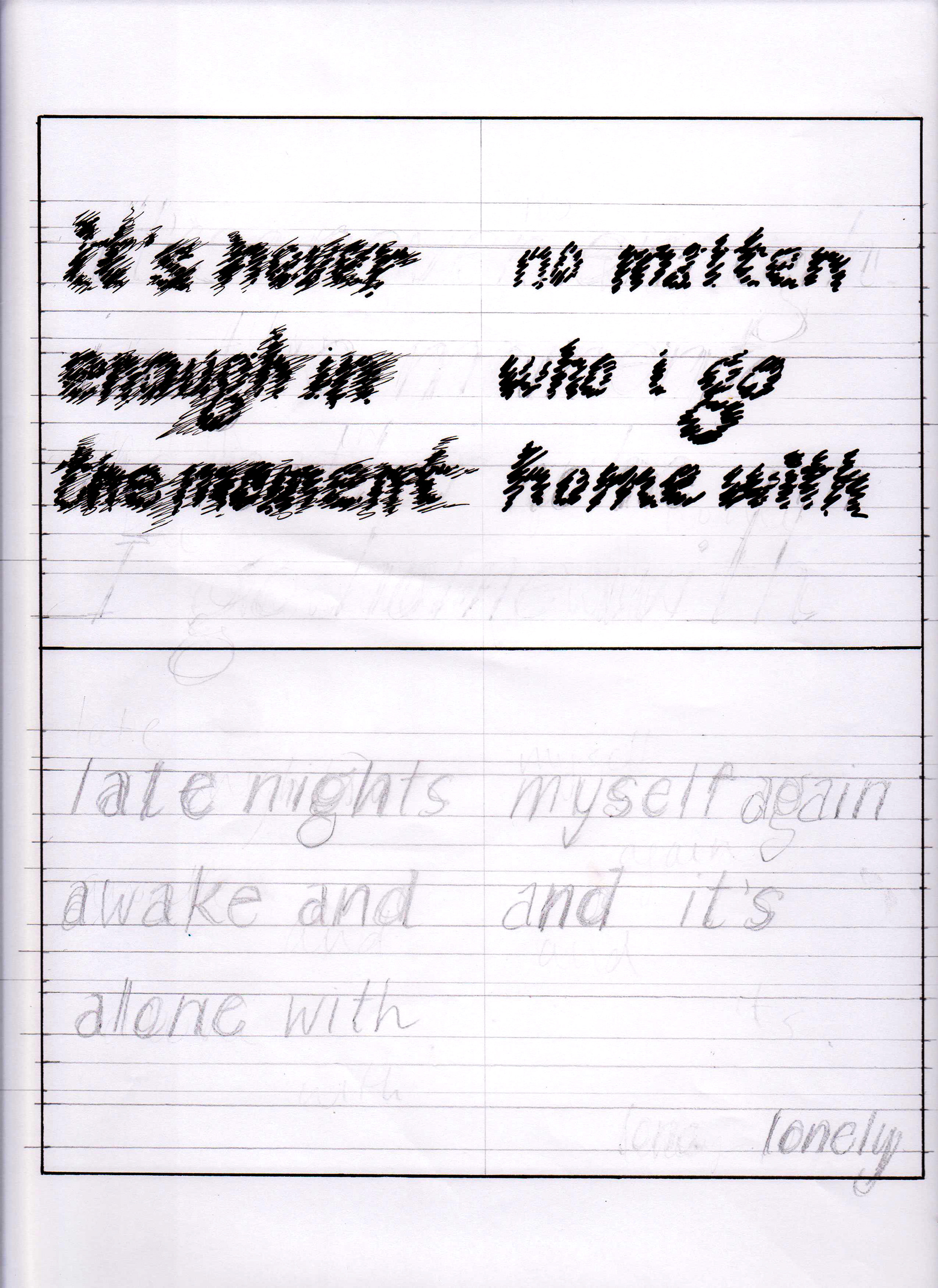 Its never enough in the moment. No matter who I go home with. Late nights awake and alone with. Myself again and it’s lonely. These lyrics were sung very quick paced and focused on a feeling of loneliness. Trying to convey a feeling of loneliness with typography proved to be very difficult. I attempted to make the words appear slightly fuzzy and jittery. Again, I did not feel like these spreads were entirely successful. 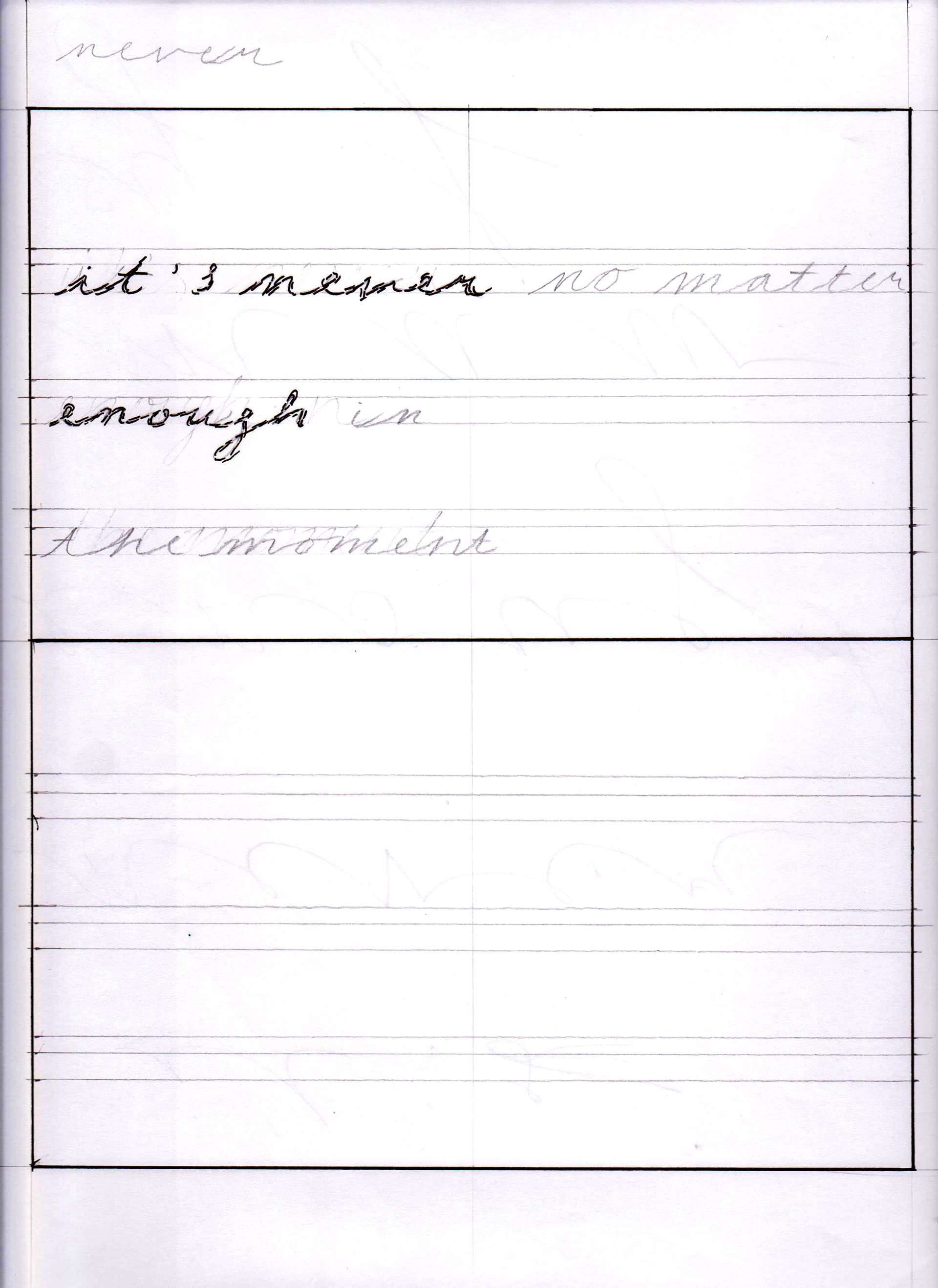 I tried again with the same lyrics from the previous sketches. 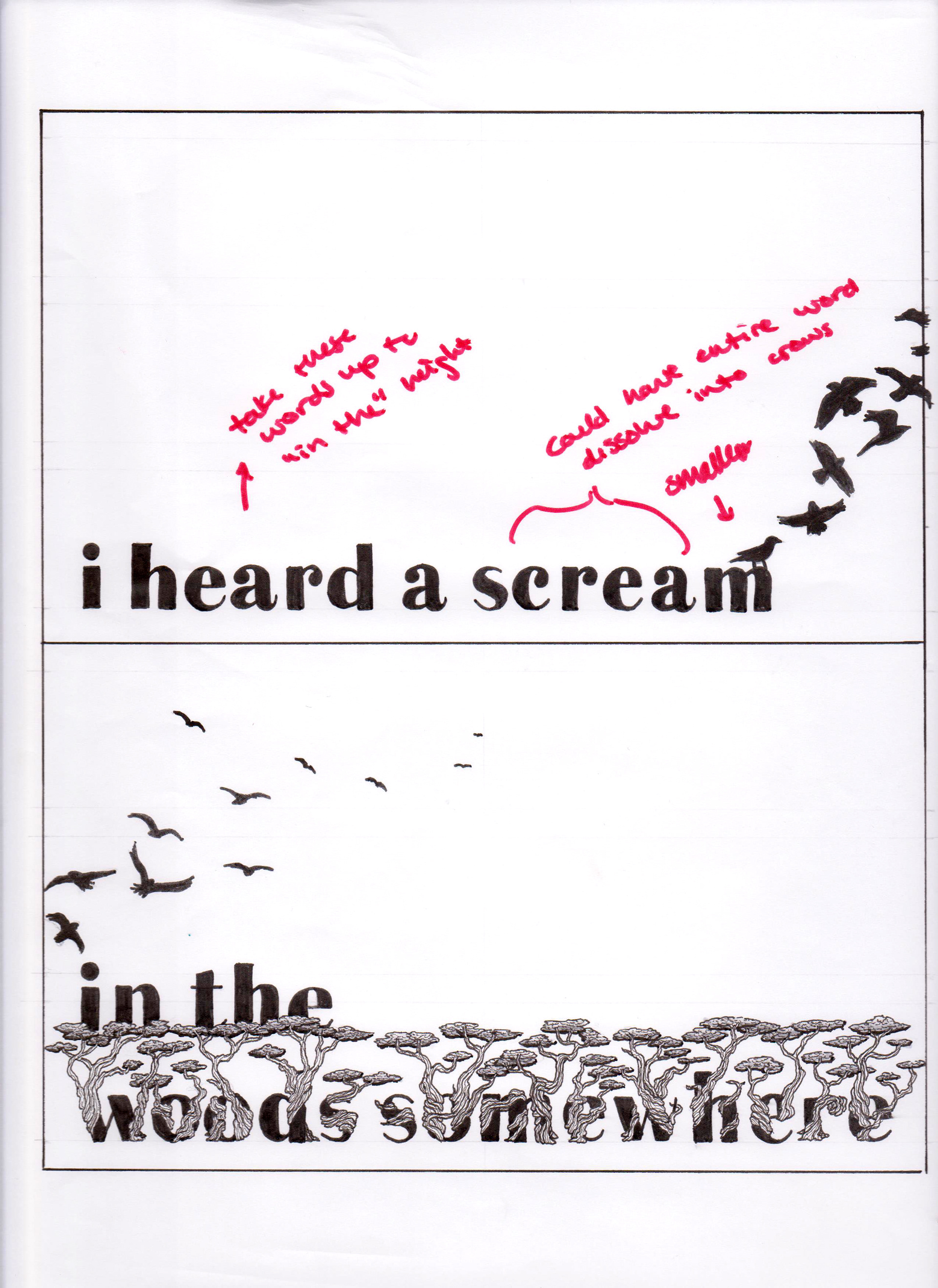 I heard a scream. In the woods somewhere. With these lyrics I wanted to convey the feeling of being in a forest, and so I made the last two words very illustrative. I entwined them with trees, and also made birds flying away from the word “scream,” because if someone screamed in the woods it is likely that birds would fly away from that area. I had the notes to move the text in the first spread up to alone with the “in the” from the next spread. I also wanted to make the entire word “scream” up out of birds and have the word sort of dissolve into the birds. 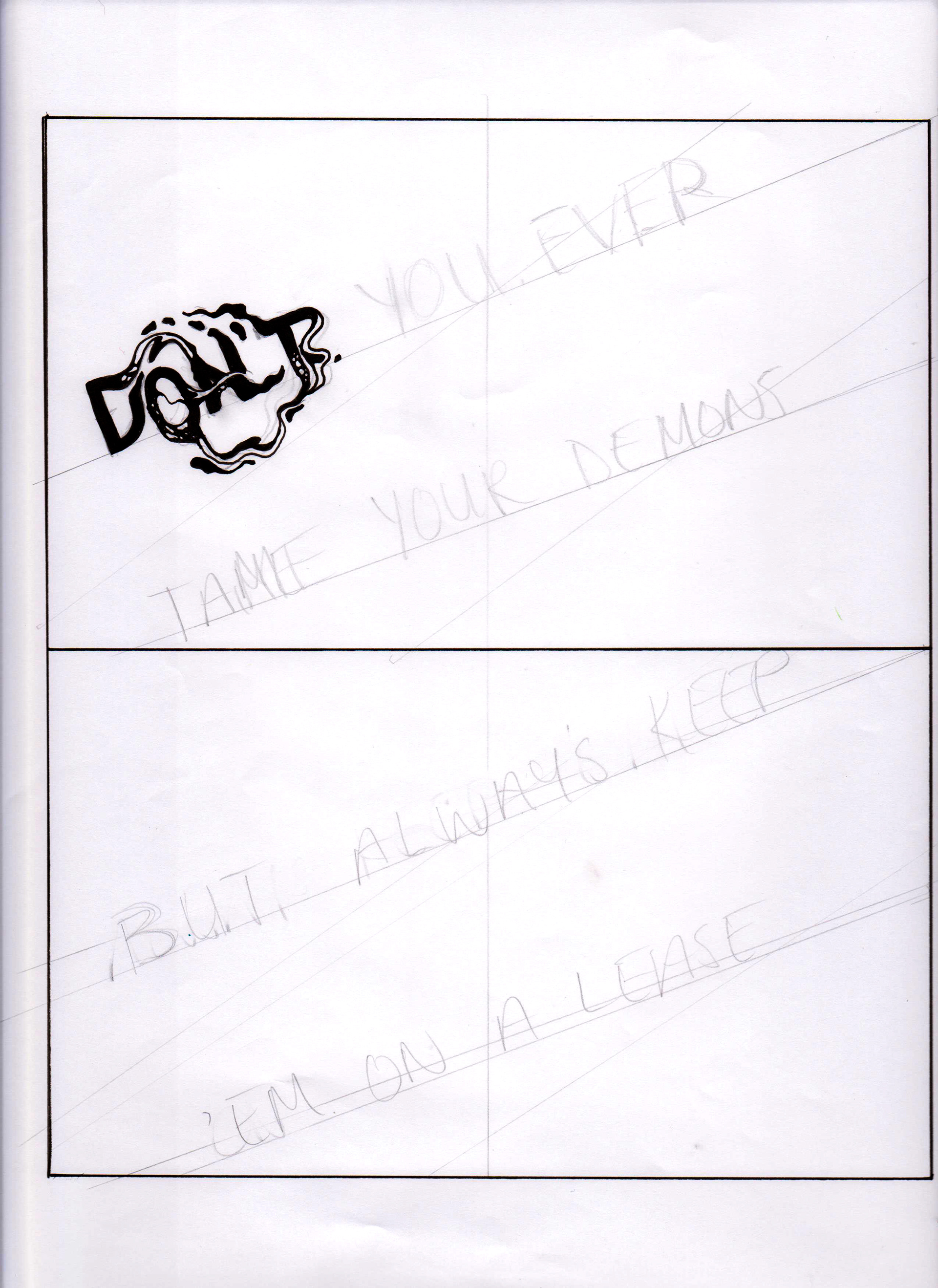 Don’t you ever tame your demons. But always keep ‘em on a leash. This song, Arsonist’s Lullaby by Hozier, has a very creepy feel to it and I chose these lyrics because of the inclusion of the word “demons.” Here I attempted to make the type look liquid, sticky, and otherwordly. I didn’t like the way I started it on an angle so on the next page I re-did the spread more horizontally. 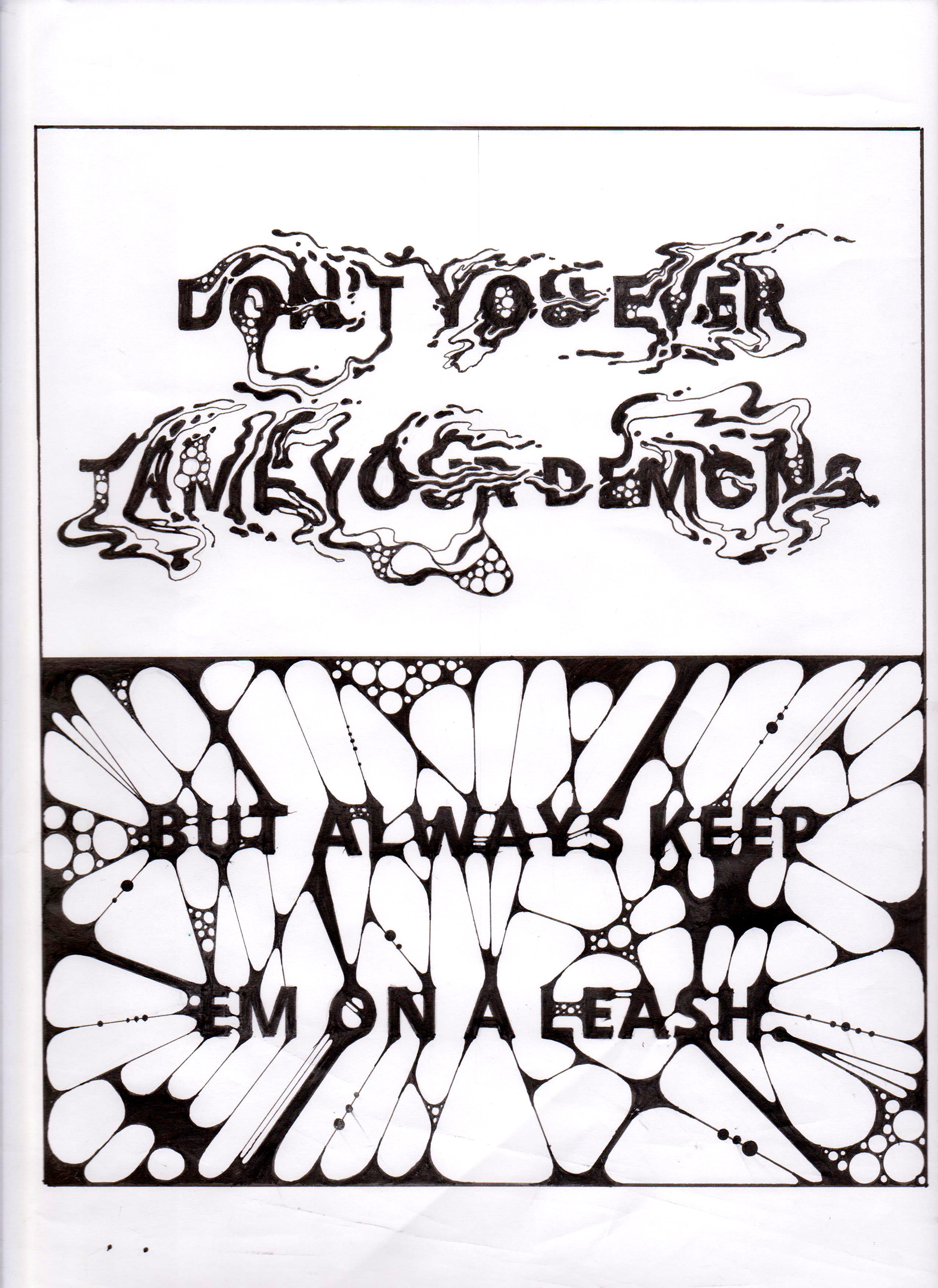 Don’t you ever tame your demons. But always keep ‘em on a leash. Here are the finished sketches of the two spreads for these lyrics. For the second spread I tried to visually represent having the type “on a leash,” by placing it in a sort of web.

Insert copy here, which should vary depending on your region. Accept